Selecting the best gaming steering wheel is no easy task when you account for the sheer amount of options out there, but we know you’re not here for “all of the options.” You’re here to discover the best sim racing wheels on the market, and we’re here to deliver.

So instead of just giving you the list of arbitrarily selected wheels, we’re going to first tell you about every little detail that needs to fall in place in order for the gaming steering wheel to be considered elite and worthy of this list.

Here’s what the sim racing wheel needs to have to make it on this list:

More than 900 degrees of rotation: A standard real-life car has 1080, so anything less than 900 just feels like a rotatable joystick. If you want the vehicle in the game to behave as it would in real life, this is simply a requirement.

Force feedback: These are the two magic words that open up the heavy doors of gaming steering wheel quality. Real cars feel different to drive depending on the terrain under the wheels, the velocity, and the direction. Put simply, the surroundings apply noticeable “force” on the car, and force feedback mimics that very force by making it more difficult or easy to make a turn or keep the same direction. Going 50 mph on a highway? That right turn will be a breeze. Doing the same on off-road gravel? You’ll feel every pebble.

Supreme Design: you’ll often see manufacturers in the gaming industry trying to iron out the shortcomings of their products by crafting some okay-looking gear that can’t hold its own after a few years of use, which is why design should only come as icing on the cake.

Without further ado, buckle up and hold on to your chair because the five best racing wheels you should strongly consider making a part of your rig are coming:

We’re starting strong with a steering wheel that’s a result of the collaboration between a manufacturer widely acclaimed to be the best in the game and the most prominent racing establishment in the world. Needless to say- it shows.

This competitive piece of sim racing technology that professional racing drivers have tested has the world’s most advanced force feedback system. The wheel is directly connected to the motor that adjusts the force applied on the wheel in a split second.

Such real-life mimicry may be amazing, but we’re just scratching the surface of what PODIUM Racing Wheel F1 can offer…

In fact, this is the first-ever sim racing wheel with cross-platform functionality, and that’s more important than you may think at first glance. The platforms change. And when you’re contemplating on getting possibly the most premium wheel in the world, it’s good to think in advance in case you ever want to switch to a different console or PC. Many things can change in a few years when it comes to platforms. However, that’s very much not the case for the handmade wheelbase and ClubSport steering wheel that will outlive a number of consoles.

This may be enough to crown Fanatec’s F1 as the undisputed king of the gaming steering wheels, and this final feature is here to eliminate any doubts and seal the deal…

If you get into the nitty-gritty of each premium wheel, you’ll notice most of them proudly mention their wheel’s ability to be connected to the wheelbase via USB cable. Not this puppy. Because there’s no need for cables when your entire set is wireless. This futuristic concept allows an insane max rotation of 2520 never-seen-before degrees. That’s more than double of what’s considered to be elite.

Next up is another collab but this time of a different kind. On one side, we’ve got one of the leading sim racing wheel manufacturers and on the other, we’ve got Sparco- the company most pro racers go to for their motorsport safety equipment. The result is an ergonomically designed steering wheel whose performance is attested by professional racers who you can often see driving with the real Sparco P310 in their hands.

When it comes to all-around picks on the market- TS-XW Racer Sparco P310 Competition Mod tops the charts mainly because of two distinct characteristics that make it terrific for lengthy racing sessions. Firstly, the foamy grip made from genuine suede leather makes it comfortable to hold for hours on end even without gloves. When you add one of the best motor cooling systems in the game to that, you get a rig that only makes a sound when you press its 100% metal pedals that come with the bundle.

And the way it is shaped only adds to that…

Its double-flat edges are the ultimate solution if you play all kinds of different racing games spanning from F1 to Forza and Assetto Corsa, the experience of which will be 10Xed by a 40-watt brushless servomotor with belt-driven force feedback.

The final thing that should be mentioned is the TS-XW Racer Sparco P310 wheel base’s amazing compatibility with any Thrustmaster steering wheel. If you ever decide to upgrade your rig with a new wheel, you won’t have to get the whole bundle with it.

All this adds up to making it the best gaming steering wheel for Xbox one.

So what happens when you take a world-class steering wheel from a company whose tradition spans generations and gamify it? The answer is a dazzling replica Podium Steering Wheel Porsche 911 Gt3 R whose bombastic tagline “Born to Win” perfectly encapsulates the characteristics you’ll want to have on your side when you’re brushing off other players in a GT race.

The main feature that sets this amazing wheel apart from others of the same caliber is its versatile paddles that allow four different modes: advanced clutch bite point mode, clutch/handbrake mode, brake/throttle mode, and mappable axis mode. Select the one that works best for you and make the race easier. What comes in handy when you’re trying to do that is another phenomenal piece of technology placed inches away from your fingertips…

We’re of course talking about the customizable OLED display that will give you that crucial info to get ahead of others and get to the fat checkered line a lot quicker. And as a final touch, the wheel is fully supported by Intelligent Telemetry Mode and complimented with a wide array of buttons that, apart from making it look like something a 3-year-old would have in his toy chest, supply the steering wheel with a multitude of useful functions.

But not everything about this racing wheel is sunshine and rainbows. There’s a significant downside that may turn many players away from it.

Sadly, the wheel is sold separately, and you’ll need to get a Fanatec wheelbase in order to drive with this bad boy in your hands. If that’s a hurdle, you can easily jump over; having an elite wheel like this on your rig is guaranteed to show results.

Thankfully the V2 version of this wheel works with PlayStation, Xbox and PC. 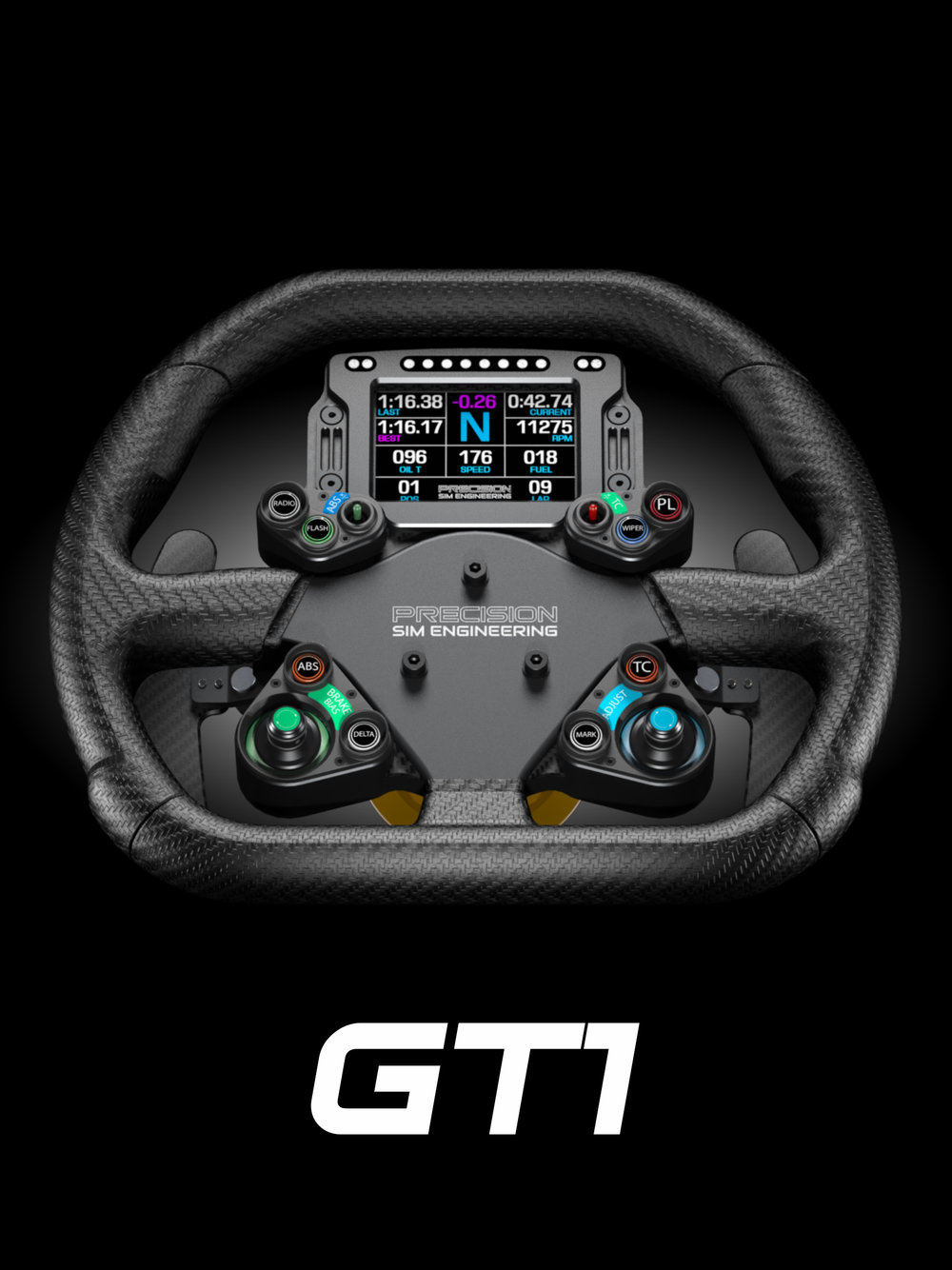 And yet another Sparco collaboration on this list, but this time it’s with a brand whose cumbersome name sets the expectations pretty high. Will this handcrafted steering will live up to them?

Well, one fact that seems to be pointing in that direction is that this wheel got on the market only recently. Before that, it used to be made only for expos where thousands of sweaty hands per day played with it for a few minutes, after which it would be shipped to another expo. How about that for durability? If it’s able to maintain such a level of precision after all that strain, for how many decades do you think you’ll be able to use it at the same level?

Probably a few. And we have only Precision Sim’s immaculate engineering to thank for that…

The base of the wheel is made by Sparco, who doesn’t need any more praise in this article, and Sim Precision took care of everything else, and boy did they do an outstanding job!

GT1’s customizable full-color LCD steals the show with various functions you can select, ranging from lap count and lap times to track temp and tire wear. The buttons are arranged in an ergonomically and easy-to-use manner so that you can reach every single one with your thumbs in a fraction of a second. Furthermore, they offer just enough resistance to prevent you from pressing them on accident which is a nice touch.

Just like in Fanatec pieces, magnets are incorporated into paddles, making them much easier to use and giving them a kick.

From a company that’s a brainchild of an ex motorcycle racer and a professional sim racer who builds his own steering wheels comes GT Sport Wireless- one of the best choices you can make to level up your sim GT racing experience.

The first thing that caught our eye is the flawless ergonomic shape purposefully crafted to create a comfortable suede cushion for your hands no matter where you like to place them.

Easy to press buttons are nestled in oval pockets that ensure you won’t touch them by accident as you’re speeding to the finish line. And there are 22 carefully placed inputs you can seamlessly use to optimize your racing performance, including 6 momentary buttons, two on/off toggle switches with status led, 2 front rotary encoders, and two “thumb” rotary encoders.

But the main attraction of this fantastic racing wheel is its wireless feature that allows a much faster rotation that can be a life-saver when you find yourself in a bit of a pickle. However, it should be pointed out that this wireless feature differs a bit from Fanatec’s F1 wheel because you’ll need to charge its 1500mAh battery every now and then. When you do, the battery will last for a comfortable 40-hour period.

Finally, like with some of the previous models we mentioned, Cube Controls GT Sport Wireless has adjustable paddle shifters that snap back into place in only a few milliseconds, which makes timing those trickly shift changes a lot easier.

If you’d prefer a non-wireless version of the same wheel, there’s a USB version available on their website.

This steering wheel will work with any top gaming PC